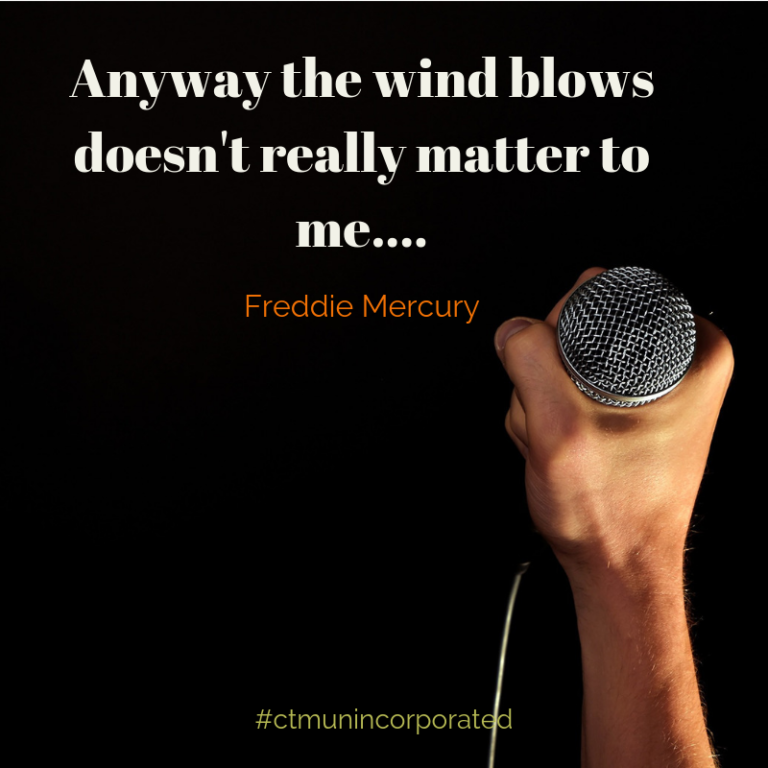 The word on the street for the last 8 months or so has been all about Bohemian Rhapsody and how Freddie and Queen became who we know them to be today. We get to see a real life account (or as real as they will share) of what happened in the background about how Queen got to be the legends we know today. First, let’s get real on where it all starts. Freddie was a baggage handler at Heathrow, this is the stark and wonderfully empowering reminder that we all have to start somewhere, we all have to become who we are here to be and it takes time.

Trust in the process

It seems from what we saw that Freddie got the melody of Bohemian way before it was actually created into a record and way before anyone really knew who Freddie was. The real question is how did it become what we know today. Well, he trusted in the process. If you go to the scene in the film where they had recorded the album and were discussing which track would be the one to be released the whole band were united on it being Bohemian, to the point they would walk away from EMI to achieve this. They stuck with their belief and their vision and they were going to do what they wanted, whatever the cost and they got what they wanted.

There is no coincidence that this film is out now and this story is being told, it’s all about the new era for me and who we are becoming, the light that is emerging, the era of the ego is over, the era of the playing small for many is gone, the era of the ego people being the leaders is in the past, now it’s a time for the people who never saw themselves as the leaders and now it’s time for you, if you are reading this and felt like you never belonged, now is your time! . Maybe you have wished in your moments of dark that “you had never been born at all” but then somewhere in there you knew, you felt, you Trusted that it would come and now it’s time it is here.

The proof is in what happened, Bohemian Rhapsody today is the third best selling single of all time only behind Do they Know it’s Christmas and Candle in the wind 1997. Imagine if they had let the so called music experts dissuade them from what they knew in their souls!

The thing you can say about Freddie is, he was real, he stood on who he was and he didn’t sway even for his family, he owned his vibe and that created the legend he became and is still today. He paved the way and was way before his time in doing this, yet he owned it and he did it. The ironic side is that something that is totally manageable was the illness that took him from this life to the next. Yet, that said it was obviously his time and there was a reason for this.

Experience is King ~ there is a reason for the process

We have to experience to know don’t we. It’s pretty crazy for someone who has never been a parent to teach you about parenting and how to do it. They can guide you so far, yet a Mom or Dad who teaches this is far more versed to share the truth than a non parents doing the same. Why because you can’t teach someone experience and being you is part of that. I have things in my life that I felt shame around and that I wished had been different for many years. Now that I do me and me first, I know truly that there is a reason for everything. So if you are reading this and you are doubting the process, I assure you that there will come a day when you will be so goddamn grateful for that diversion you took. I say in my book (coming soon) that had the universe sat me down years ago and given me a heads up on what was to come I would have said “You gotta be kidding me!!!! I can’t do that!” Yet, having lived through all I have, I have in that time learned that every experience, good, freaking awful and in the middle has been for a very big reason and has helped me to be who I am today. I own every mistake, joy and wonder that has happened to me, they have all shaped me to become as I say “unincorporated” from the way I thought I should live, into the world I own today.

Be~ing you is your destiny and all you ever came here to BE!

All of this is happening now as the energy has shifted, a new way of living and be~ing is here. There has never been a time like there is right now, and we are seeing new truths everyday about people and things we have trusted and believed in for years not being what we were lead to believe they were and are. One of the most amazing things about the speaking I do and working with my clients is you hear about all sorts of things first hand that you seldom imagined could be true, yet they are. I have learnt through my work that there is only shame when you allow it to be there, there is only judgement when you allow it to be there and the only person in the world who you truly need to make happy is you. When you are happy you radiate a vibe that brings the people who you are there to vibe with. You attract what you vibe and you own who you have become. So Be You, that’s all you ever came here to be. As the songs says….Anyway the wind blows, doesn’t really matter to me…

How do I become me?

Right now you could be reading this and say yeh yeh Clare that all sounds good, yet how do I actually do this and become me. Well I will tell you. Step one is you gotta freaking decide who it is you want to be first. This is the bit that so many of you miss, you forget to get really clear on who it is you want to become and you get caught in the lie that you cannot become that person until certain things happen. It’s not about have, do, be…..it’s about BE, DO, HAVE. Start with the end in mind is what they say isn’t it. So do the work on getting clear on who you want to become.

The next step is then about changing habits and behaviours. You can’t get a fit body eating cake everyday, so don’t expect to become a top class PT fitness guru if you are not behaving like one. And like I said about Freddie earlier, he wasn’t born a rock star, far from it. He was born to become this and he lived it to achieve it. He had the end in mind at the beginning. So with this in mind what one habit and behaviour can you switch today for a more empowering one that will lead you towards your dream?

Ok, we’ve now got where are you now, where do you want to go. What is the next step. Well we know from research that the brain has no clue what the difference between reality and visioning is. You will become what you vision, with this in mind you now see why it is it so important to work out what that looks like and why so many fail to ever become this. They decide that they want to be like Oprah or Freddie and not that they want to become their own version of great. When you own your vibe as I said earlier, that is when the universe aligns just where it is meant to and the magical things start to fall into place. Again, I will keep repeating myself, you have to trust, you have to be consistent, you have to own that this is you, even when there are moments of doubt. Create the vision, go into great detail with this vision and then live it in your mind every single day, own it, believe it, trust it can be real and you will start to see it play out in your life in real-ality.

So to all you misfits, no fits, just different! You came here to be YOU, no apologies, no hiding, no shame, no judgement, no holds barred……YOU! Own it, vibe it and do it with confidence, the only thing standing in the way of you and your greatness is YOU. If you don’t stand on your star you are doing the world an injustice, because you have something that it needs to hear and there is no time like now to get that message out into the world.

Love to hear how it goes, share your story with me and let’s inspire the masses to become who they really came here to be.

A Love Letter to Money…

Don’t bleed on people who didn’t cut you.

Are you worth working on?

Exploring your most transformative emotions to evolve and live your wealthy abundant life.